Quern is a first person puzzle adventure with captivating story and beautiful graphics. The game is currently in early development by Zadbox Entertainment. Quern refreshes the genre with flexible gameplay and reuseable puzzle mechanics. The visuals and the music combine traditional and modern elements providing a unique mood for the game. 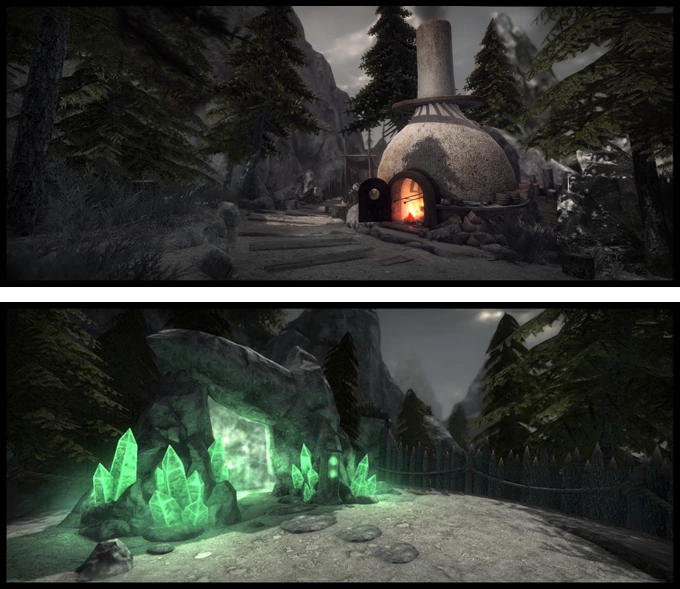 "Quern is but a little fragment of the World Chain, but it has quite an important role. Civilisations rise and fall due to this world."

As huge fans of story-driven games and detailed narratives, we wrote and sketched the concepts of a complex and coherent world. The works of Jules Verne in particular, influenced us greatly. Our aim was to capture the mood and essence of his novels and combine that with magical, fantasy elements.

This universe is a structured system of worlds all connected to each other. The player assumes the role of a person, who has been trapped in one of these worlds which is a mysterious island surrounded by oceans as far as the eye could see. He finds himself in front of an entrance to a deserted ancient city.

The player recieves guidance from two different sources, which are both mysterious in completely different ways. One of them is a scientist, who talks to the player through letters, which are factual, rational - written with a logical approach. The other one is an ancient spirit, who makes connection with us through visions, and gives us guidance about the spirituality of the island.

The player soon finds out that these two guides have conflicting opinions about the island's mysteries. They both demand us to understand Quern, but while the professor wants us to experiment with the environment and manipulate it, the spirit asks us to observe and be a part of it, without physically changing anything. The letters we find contain direct instructions and answers, whereas the visions raise questions, so we find out the answers ourselves. It is up to the player to decide which guide they want to follow, but sooner or later, they must make a permanent choice.

Before we created the story of the stranger (the player), we wrote a whole backstory for the island itself. There were three heroes of an ancient civilisation who have been trapped in Quern long before the stranger has. They managed to understand how the operating principles work in this world and experienced a whole new way of existence. Their presence here made great consequences in their home world. They left behind fragments and the wisdom of their culture in many different forms. Thousands of years after the three heroes managed to leave the island, an archaeologist came in search of their legacy. He knew about the unrealistic nature of the island and he came here with a clear purpose, to understand it. The professor tamed the elements of the island and learned to use them for his own purposes, his knowledge has grown more powerful than he has ever imagined. However, unexpected events happened in Quern not long before the stranger arrived.

As we delve deeper in the story, we find hints of the happenings of the past, and these aid us in understanding our role and importance in the story. 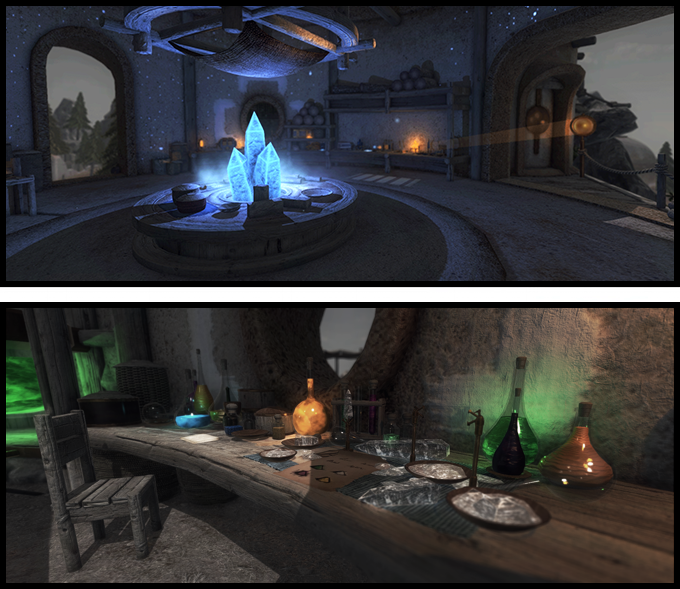 The gameplay follows the main elements of classic puzzle adventure games. We can pick up many different objects and store them in our inventory where we can inspect them and interact with them. These objects all have colourful and varied purposes. We run into hints and clues that we will need later on to solve riddles or complete puzzles. At first, we face smaller, easier, independent challenges, and as we progress, the game starts to get more complex and unpredictable.

Quern is open world, meaning the players can freely explore and wander around the island. Putting an object in a slot and walking away is simply not our style. Of course we have keys opening gates, but in Quern most of the puzzle mechanics are reusable in some other way. As the story is progressing, we face more and more complicated challenges that might lead us back to an earlier puzzle, forcing us to re-imagine it with the extra items or knowledge we have gathered. This way the player needs to think about the game as a whole, not just as a series of individual puzzles. We also allow the player to mess with the game mechanics by not stopping them when the interaction is incorrect. The player has the chance to experience other outcomes which sometimes seem to be completely pointless. These results help the players find out how to get to the solution.

We took influences from different game genres and implemented their map systems. Looking at the map provides the player with a better understanding of the place he is currently exploring. Different zones and locations are revealed on the map as the player wanders around the island.

Despite believing that FPS controls give the player the perfect freedom, we are working on another option for people who are more familiar with the classic, mouse-only controls. 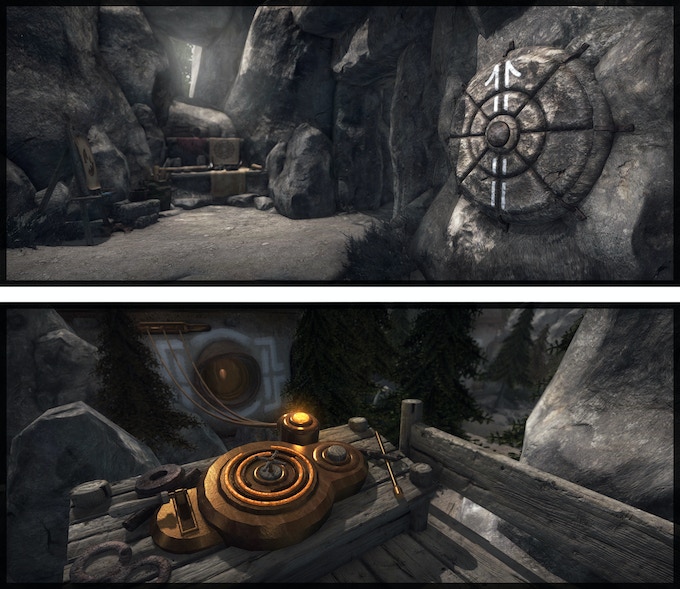 To make the game more immersive we wanted the players to be themselves instead of playing a role. One of our main concepts was to give no information about the look or the backstory of the main character. This way people can easily connect with the stranger regardless of age, gender or ethnicity.

As great fans of the MYST series, the visual style of these fantastic games have been our biggest influences. We aimed for a surreal mood to make the player curious as to what the rules of this world are, and urge them into diving deeper and deeper into its secrets.

To further the surrealism, we designed Quern to be a world full of contrast, yet still maintaining aspects of realism. We have a warm, sandy island in the middle of an endless ocean covered with pine trees, which are originally native to mountains. The sky is full of rain clouds but it never rains, so the ground is dry and cracked. The buildings are clearly ancient with relatively modern, mechanic additions.

As the puzzles get more challenging, completing them becomes even more visual and directly rewarding in addition to the progression made in the game.

Though the island itself is highly detailed and well processed, the menu and interface design is elegant and minimalist, which fits well with the realistic graphics. 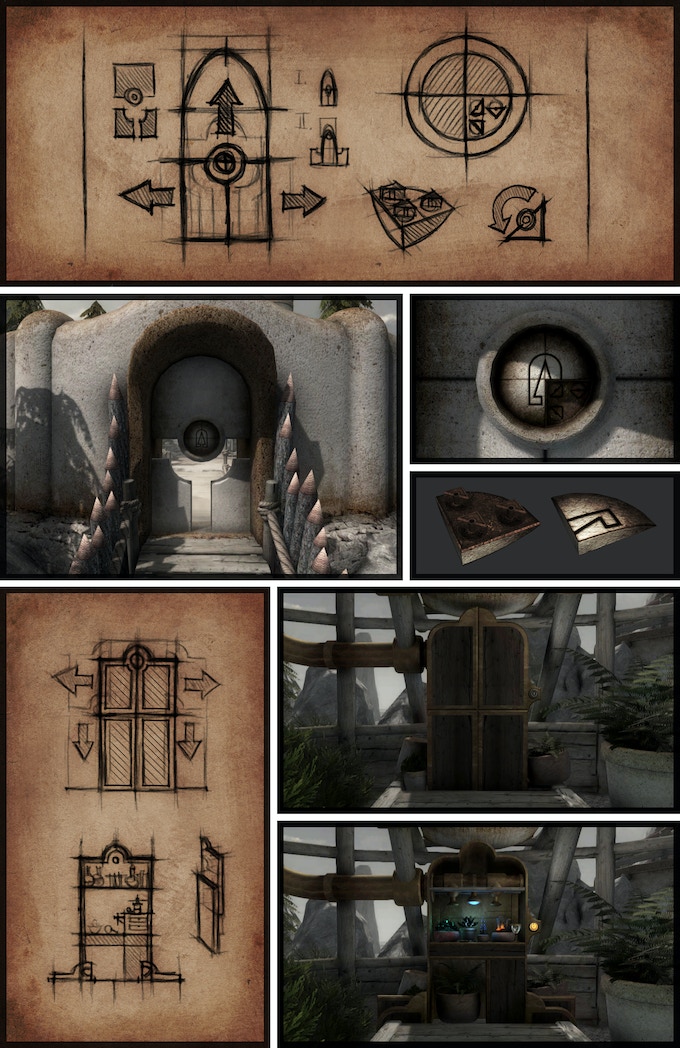 When we started the development, we worked with the free version of Unity 4, but we recently transitioned to the brand new and more efficient Unity 5. This change gives our artist a new level of freedom to further improve Quern's graphics. 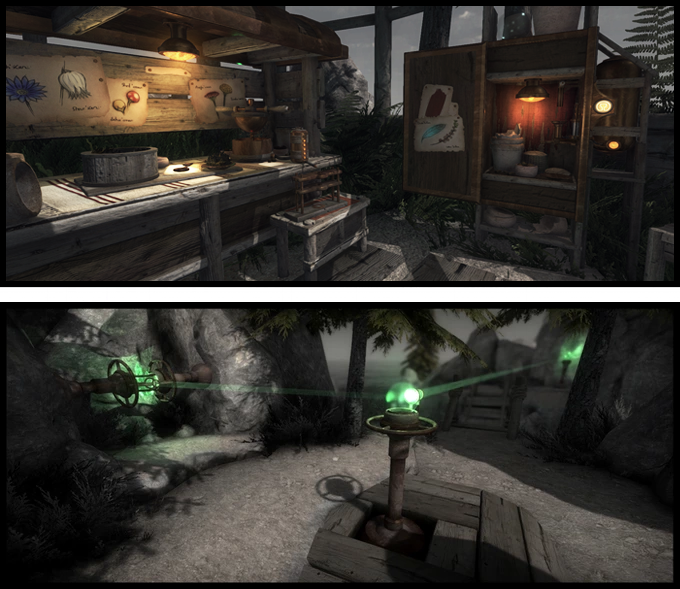 We are working on the English texts and voice over for now, but we plan to translate the game to at least two other languages: German and Spanish.

For now, we are developing the game for Windows, Mac and Linux but we hope to be able to reach PlayStation and Xbox consoles as well.

We are already testing Oculus Rift with satisfying results and we are eager to work with it, and make Quern a more believable experience.

The game in it's current state works perfectly with 4:3, 16:9 and 21:9 aspect ratios and we are working on interface optimization for 4k to make it ready for future standards.

We all knew each other before we started working as a video game development team. We were a group of friends with completely different professions and interests, but one thing we all had in common, was our love for games. Soon we realised that our differences complement each other, and we started working together on a test project years before Quern. It started out merely as a hobby but we turned out to be an efficient team and we all really enjoyed working together. At the time we were all university students and we had no time to finish the project. 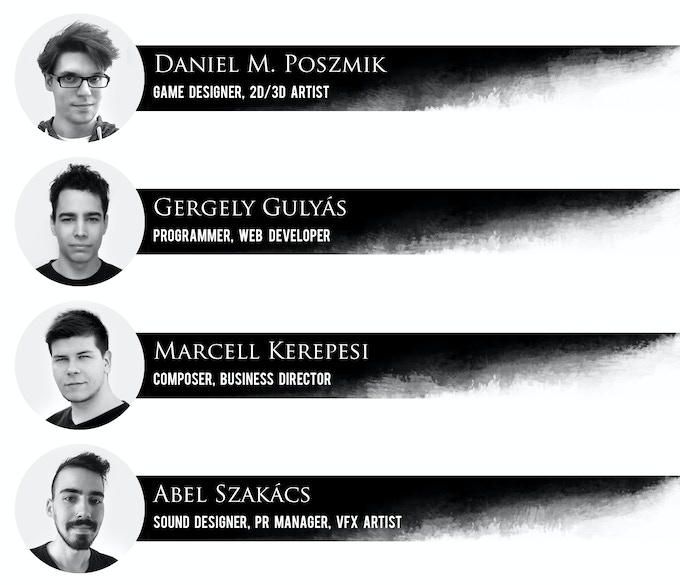 HOW DID QUERN START?

Quern was originally a 3D artwork for our designer, Daniel's dissertation. It was basically a non-interactive environment design demonstration for his thesis. People's reactions to the project were far better than expected and they wanted to explore this yet unfinished world themselves. After getting his degree, Daniel started thinking about developing a game with the already created and beloved style and mood. Years have passed since the test project and we came together as a team again to create something bigger than any of us has ever done before.

Working on video games is our dream, and we are eager to do this as a full time job. After we finish Quern, we would like to continue working together on other video games and media related projects as an official studio. For this reason we founded a company called Zadbox Entertainment.

The game has many different areas with their own individual moods and atmospheres. We wanted each zone to have its own unique music while still keeping the soundtrack consistent. One of the challenges was to find the right ambience for each area and to build interesting soundscapes around key scenes in the game.

The music is an important factor in making the gameplay even more immersive, by having it react to interactions made by the player. The soundtrack of Quern works well on its own but we had to make sure it also works as background music. It's very atmospheric with a combination of textural sounds and traditional instruments with the addition of unique musical elements for each scene.

As indie game developers we don't have a publisher to cover the expenses that come with creating a video game. This is our first major game and we would like to get feedback from as many sources as possible. Kickstarter is the best way to achieve this. Supporting us here gives us immediate feedback about the possible success of the game.

Our biggest hope is to get enough support to fund the game so we can dedicate all of our time to the project.The money goal we set would allow us to create Quern the way we imagined it.

WHERE WILL THE MONEY GO?

We dedicated most of our free time throughout the last year for the development of the game. We need your support so we can focus on Quern above anything else and invest all of our time and energy into the game. We already have plans we can work with although the game's quality, length and the amount of details all depend on the money we can invest into the development.

Besides that, there is a fair amount of money we would like to spend on recording the voice over. We've already got in contact with a brilliant voice actor, Michael Morris, who we think is the perfect match for the narration of Quern. We talked to him about the game and our vision and he supported us by recording the narration for our trailer. We knew we needed to work with him at the very moment we first heard his amazing voice.

Finally there are the expenses we simply cannot avoid. Fees for the services we use, prices of the software we need to buy, renting a workplace for us, paying taxes and managing our company.

Our money goal would allow us to finish Quern but we have further plans to improve the quality of the game and to give you more content. 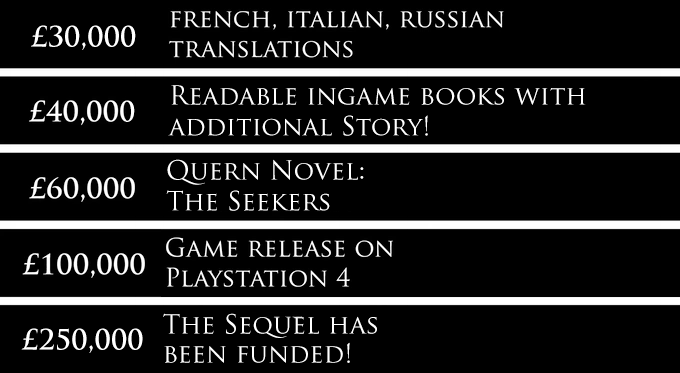 We highly appreciate any support you can give us! Here are a few perks you can choose from when deciding on backing the project.